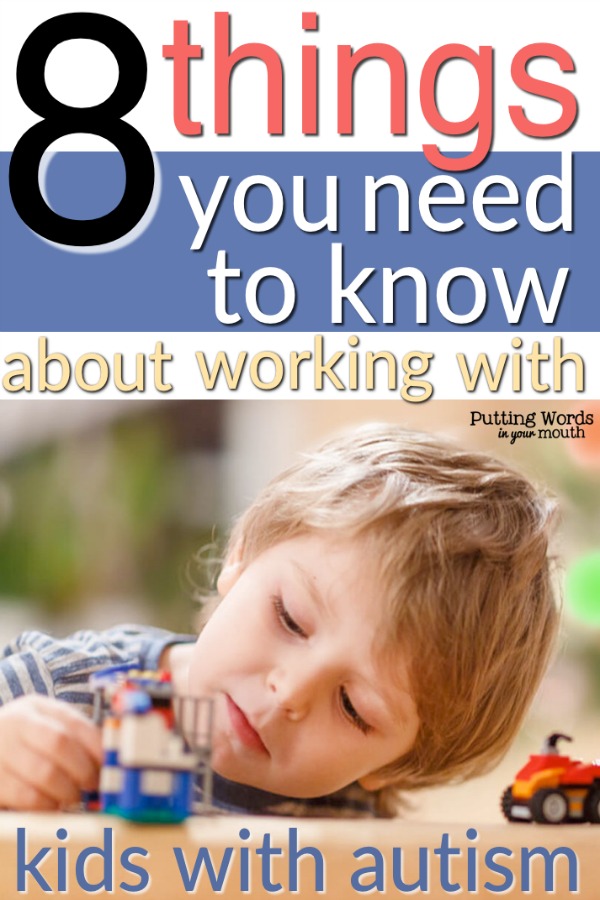 Okay so, so far we’ve learned THREE essential things about working with kids with ASD,  but here we are again. Thanks for hanging in with me! The FOURTH thing you need to know when working with children with ASD… 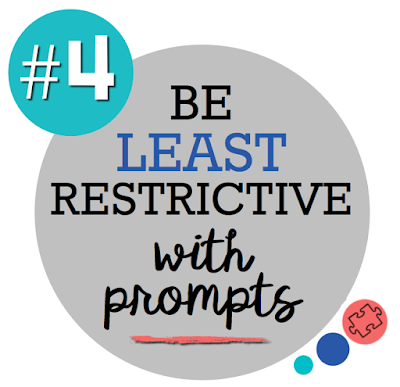 Prompting, scaffolding and cueing as commonly used interchangeably (whether that is incorrect or correct is up for debate-more on that later), but they all involve inserting something between the request or demand (do this) and the target behavior (child does the thing we said) in order to get our desired response.
There is a hierarchy of prompts from least restrictuve to most restrictive. Now you know the name of the game in schools is least restrictive. We should use the least restrictive prompt needed to elicit a correct response.
TIP: Before even giving a prompt or cue, have another child do it first. Peer modeling is so powerful….well, IF the student is attending to the peer.
Here is the hierarchy: 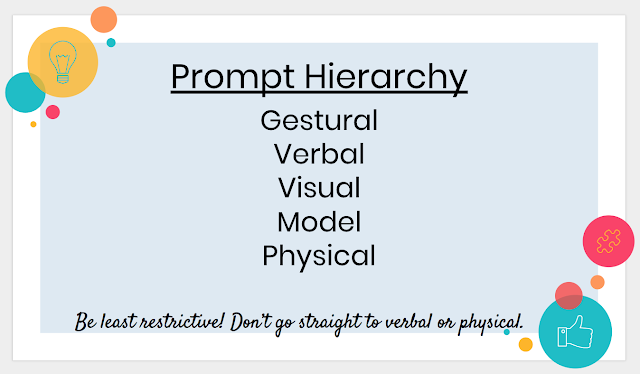 Being least restrictive sounds like common sense, but it’s harder than it sounds. Think about it – how often to we go straight to verbal? Or even physical? Not only us but think about teachers and even paraprofessionals. YIKES!
Let’s use the simple example of a child who either puts things in his mouth or touches others while walking down the hallway. Our target skill would be for him to keep his hands to himself.
In that case, these would be some appropriate prompts from least to most restrictive:
1) Gestural: Point to our own hands.
2) Verbal: Say, “hands to self” or “quiet hands, please.”
3) Visual: Show a visual prompt like the symbol for quiet hands.
4) Model: Act out folding our hands over our belly or whatever gesture that the child could understand for “hands to self” or “quiet hands.”
5) Physical: Go to the child and physically place his hands in a quiet hands position.
Over prompting and not using
the hierarchy results in prompt
dependency and learned
helplessness.
WE (yes, you and I) can CAUSE prompt dependency!!
Think of that student who just LOOKS toward his or her paraprofessional each and every time a directive is given. That’s prompt dependency. He heard the information but is waiting for the para to prompt him or her before taking action.
I love this video of prompt dependency from Navigation ABA. Take a look and see if any of YOUR kids look or act like Valerie…
OOPS! Doesn’t that make you think?!
It makes ME think THIS… 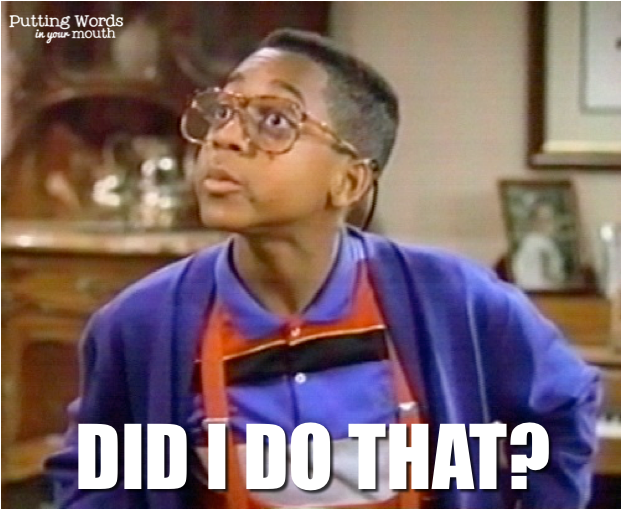 So I said I wouldn’t get into the debate of prompt vs. cue but I can’t help myself…OH, and I’m not going to lie… I didn’t come up with this all by myself. I heard it from a very wise SLP with lots of experience working with kids with ASD…. 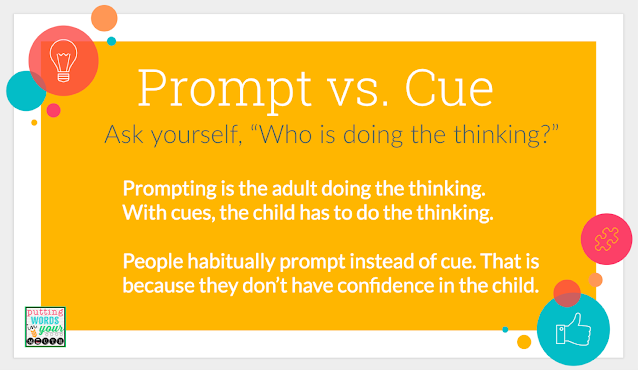 When kids have to do the thinking and decision making, they start to finally take advantage of contextual cues in the environment, AND when they start doing the thinking, they’re taking steps toward independence. THAT is our ultimate goal so we must move from prompts to cues in order to foster independence.
If a child has to think on their own about what to do, it’s a cue.
Example? Well, a cue for quiet hands (as opposed to all of those prompts listed above) would be “Sally (nearby peer) I love how you are keeping your hands to yourself” OR asking the child, “What should you be doing right now?” That is a CUE because Sally still must do some of the thinking. She hasn’t been directly told or shown exactly what to do. The adult, instead, just got her brain whirling, and then hopefully will provide ample wait time.
If you or anyone else tells or shows the child what to do and the child doesn’t have to do his or her own thinking and problem solving, IT IS A PROMPT. Not a cue. Cues are less likely to cause prompt dependency and learned helplessness so it’s worthwhile that we learn to cue instead of prompt.
Simple to conceptualize – not so simple to put into practice, but I challenge you to try! 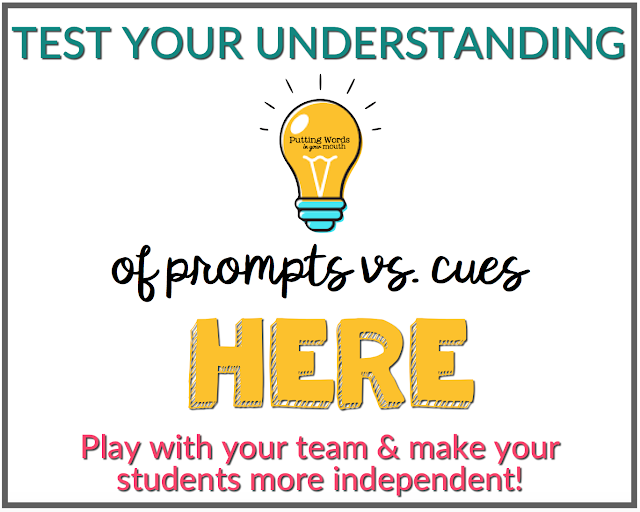 Take the Prompt Vs. Cue Kahoot Quiz above. Try it with your colleagues or sped team!

As educators, our goal is always to cause learning. For kids to learn they have to be doing the thinking; we can’t continually do the thinking for them. 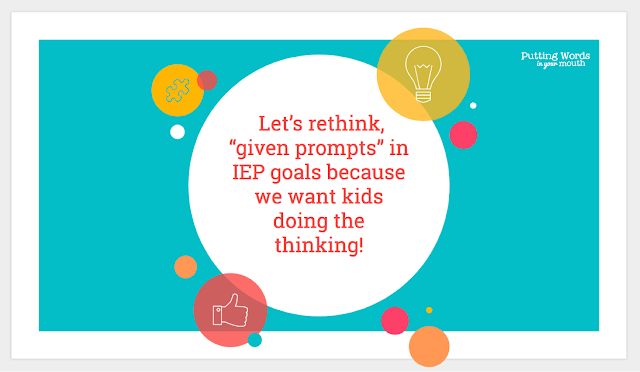 Thanks for reading; now go out there and create some independent thinkers!

Got more tips? I’d love to hear them.
Please share your wisdom below because we need all the help we can get!

« How Alexa Changed My SLP Life
#5 in a series: 8 things you need to know about working with children with autism »