ShareTweetGooglePinterestMail
Are you ready for the SECOND most important thing I think you need to know when working with students who have ASD?  If not, click here to read #1 first! 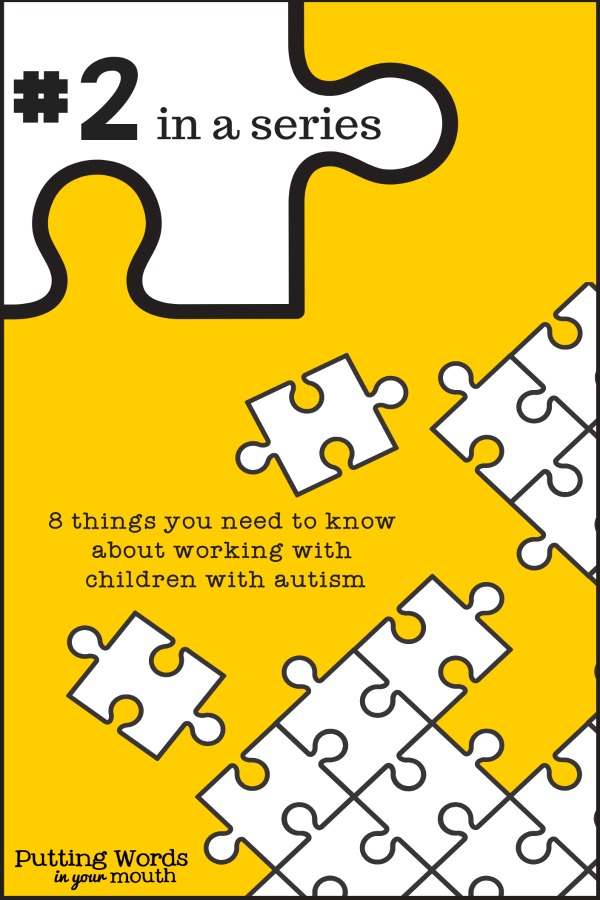 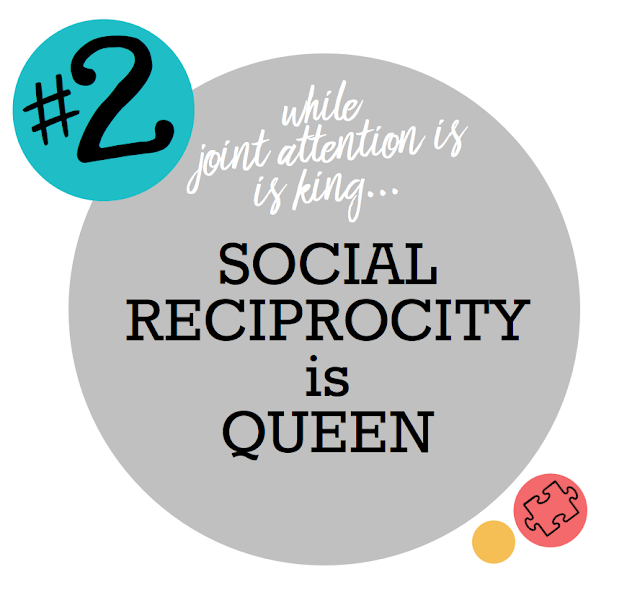 Now that your student has joint attention, interactions with others are possible!  It’s time to start working on social reciprocity.
.
You probably know that children with autism are innately object oriented, not people oriented. They may not notice, acknowledge or even SEE other humans around them (more on that later). If that is the case, how can instruction (by humans;) be taken in? How can social interaction occur?
.
Well, our job is to increase their understanding that communication (verbal and nonverbal) is important and that other humans are relevent (and even quite useful) to them. This is something neurotypical children learn at a very young age, but childre, with ASD lack.
.
Check out this oldie but goodie video by Worth Publishers that shows how typically developing little ones read and react to nonverbal communication…
.

Our students with autism don’t do this.

The fact of the matter is that individuals with autism are wired differently.
Check this out… 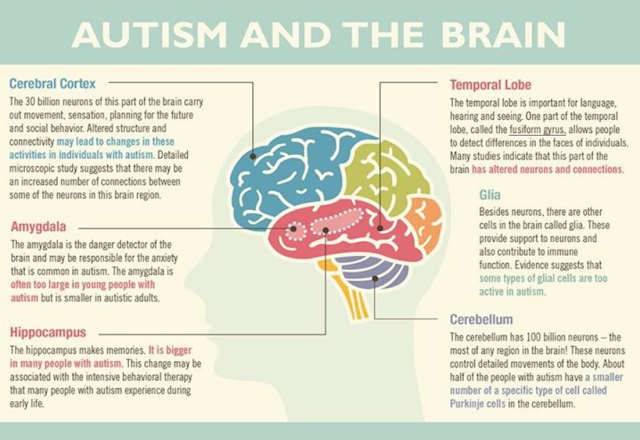 So you see in this illustration that their brains really are different! The Amygdala, which is responsible for regulating our fight or flight response to threats, is much larger in children with ASD (and smaller in adults with ASD). The Hippocampus, which is our memory center, is also bigger in people with autism. You’ll can see above that the temporal lobe, which we know affects hearing, auditory processing, and language, is different from individuals without autism. The temporal lobe has something called fusiform gyrus, and there are simply fewer of them if a person has ASD.  These specifically aid in processing faces, facial features and interpreting the mental state of others. Can you imagine the implications of that? If often seems as though our students with autism don’t even acknowledge our existence. Well, maybe they can’t perceive or see us.
.
You’ll see in the “cerebellum” notes that people with autism have fewer Purkinje cells which may account for deficits in motor skills.
.
Why does any of this matter anyway? It matters because it is important that we (and teachers and other school staff) recognize that these students have neurological differences that create real challenges. Have you ever been around staff that truly believe a child with autism is just being ornery or difficult? This information may be an eye opener (and mind opener) for them.
.
You can read more about autism and the brain HERE.
.
So to sum it up, this is why our students with autism are less people oriented and more object oriented. 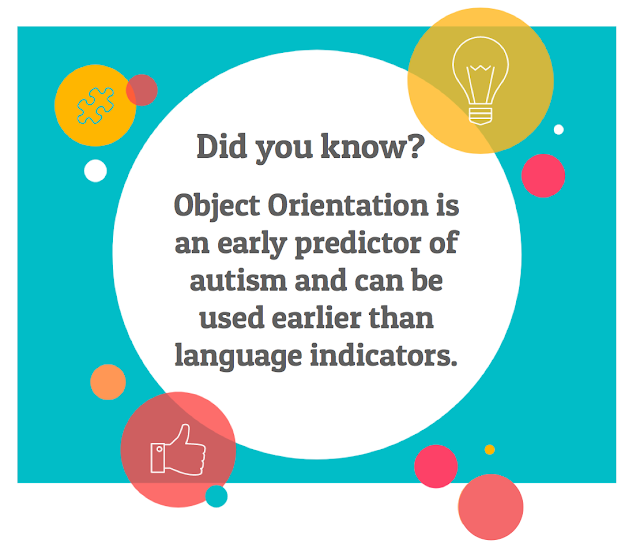 By 14 months of age,  if a child attends to geometric shapes 69% or more of the time, 100% of the time they have autism.
.
Click HERE to read the abstract of the study and see the images they used to conduct the research.
.
In a nutshell, the study conducted at the University of California San Diego Autism Center of Excellent set out to determine if toddlers with ASD (aged 14 to 42 months) preferred to look at geometric images rather than social images and if this could be used as an early predictor of ASD. They simultaneously showed 110 toddlers a 1 minute movie with pictures of geometric shapes on one side of the screen and kids in action on the other. The 110 included 37 kids with ASD, 22 with developmental delay and 51 who were typically developing. Using eye tracking technology, the researchers compared the time that each child attended to the moving geometric shapes versus the kids in action, and they compared the groups. They concluded that toddlers with ASD as young as 14 months spent more time fixating on the geometric images than the other groups, and that if a toddler spent more than exactly 69% of the time fixating on the objects, they were identified as having autism 100% of the time.
.
I don’t know about you but this research BLEW MY MIND! I mean, yes, I know that all of my students were fixated on objects, but this study is monumental because it meant that this could be the earliest way to confirm that a child is at risk for autism- earlier even than communication differences.
.
Now let’s put this information into a school context. Have you ever tried to do therapy on a playground? I have! It’s seems so logical to take advantage of the active play and peer interactions. I had one student with autism who sought out sensory stimulation. He always made a bee line for the swings. Then he planted himself and demanded someone push him. This was actually an awesome activity for communication because I could strategically stop pushing him which required him to learn to communicate (in continually more complex ways) that he wanted to resume the activity – or that he wanted to go fast, high, low – or wanted me to twist the chains so that he could spin.
.
For my students who were extremely object oriented, however, it was as if they were the only people on the playground and no one else existed. After reading the research above, I GET IT.
.
THIS was what all the other kids in their class processed when they stepped onto the playground:
. 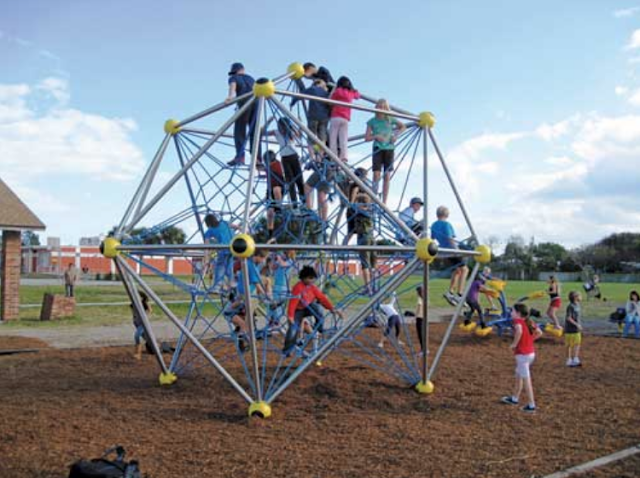 .
They saw their friends, they looked at who was at the top of the jungle gym, they saw who was on the seesaws, and they noticed if someone got hurt and was crying. They ran to tell their friend hello, or they tried to push their way ahead of the others to get to the top.
.
Now I understand why my students with autism did none of that. It’s possible they only saw (or visually processed) this…
. 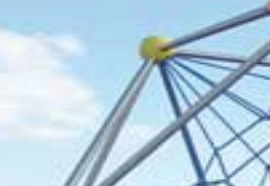 .
(please pardon the blurriness; I’m just trying to make a point 🙂
.
And here we are wondering why they aren’t interacting with their classmates, or noticing the teacher yelling at them to stop, or seeing that everyone else has gone inside the building.
.
They’re doing what they do (courtesy of their wiring); they’re zoning in on geometric shapes. 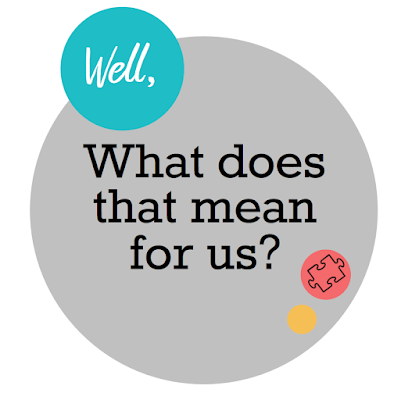 It means that not only will social interactions be a struggle, but taking in new learning will also be a struggle because instruction comes from people.
.
It’s our job (and the job of special education teachers, gen. ed. teachers, etc.) to teach them that people are important.  Joint attention is the gateway to social interaction. So now that we’ve established joint attention, WHAT DO WE DO NEXT?  Here’s what:
.
1) Limit access to objects.
I often used the items my students were obsessed with (while stipulating that they communicate in order to have acces to them), but that should also be limited because when engaged with those items, kids with ASD tend to speak AT us instead of TO us.
.
2) Be prepared.
3) Mirror the child

4) Once the child is interacting with adults to obtain objects, increase expectations. 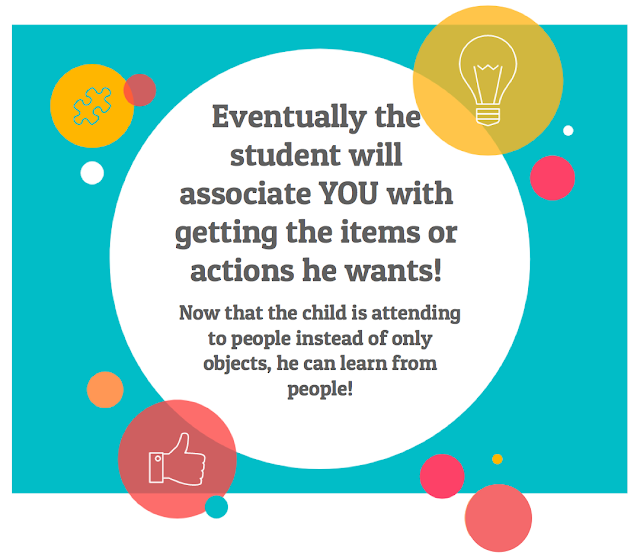 In order for students with autism to be successful in school and in life, they have to be able to orient to people, not just objects! It’s not a quick process, but it’s a crucial one.

.
What tricks and tips do you have to build social reciprocity? I’d love to hear them!
See you soon with #3!