To be completely transparent, for more than half of my career, I was torn about exactly how to attack vocabulary- about providing instruction that would actually have an impact past my therapy room. I confess… I used many of the questionable methods that I discussed in Part 1 of this series. I often taught words in the moment; I taught strategies for context clues and words related to a book or theme. I felt confident about teaching Tier 1 words with my little ones, but academic vocabulary was a challenge for both me and my students. 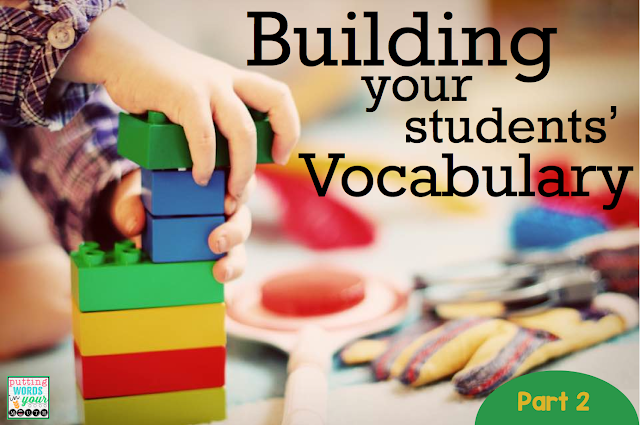 The fact of the matter was that even though I was in my students’ classrooms twice a week, I knew it wasn’t enough to make a substantial difference on something as big and all encompassing as vocabulary.  One thing I knew for sure was this… 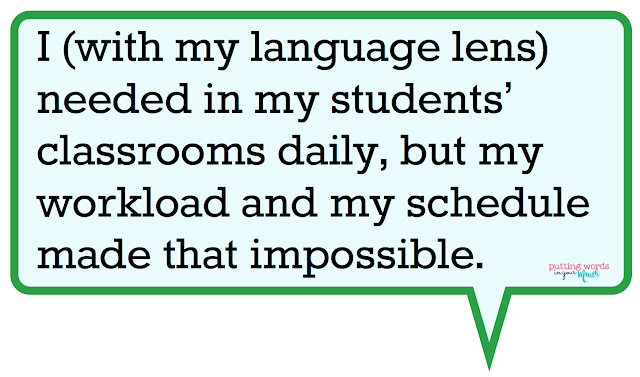 This was especially true with regard to my 4th and 5th graders who were struggling with the rigor of the curriculum. I know, I know… our schedules shouldn’t dictate services, but haven’t we all been there? We can only cram so much into a work week.
I became determined- bordering on obsessed – with the fact that I had to increase their vocabulary and I knew enough to know that they needed to use their new words daily. Their vocabulary deficits were making every single passage they had to read (and comprehend) seem like an impossible feat. Their vocabulary, or lack thereof, and subsequent inability to comprehend sooooo many words in text, was becoming their downfall in every.  single.  subject.
How would I improve their vocabularies (and thus their background knowledge and comprehension skills) if I wasn’t with them to make it happen? Besides, they had plenty of IEP goals that had nothing to do with vocabulary.
I decided to post a Word of the Week outside of my therapy room door. My room was situated such that every student passed it several times a day- to go to the cafeteria, to go to P.E., to go to and from the busses and so on.
I posted the word of the week with the definition and a funny sentence related to our school (that would make it stick in their memory for sure!).  It was soon clear that no one read my little word of the week. It was a massive failure; it was equivalent to expecting students to learn words by osmosis. I went back to the proverbial drawing board.
I knew the key was to get kids using the word of the week – not just reading it or defining it. That was a tall order since, although I think words are fascinating and learning new words is exciting, my students certainly did not. For them, learning a new word… reading…anything language related….was about as exciting to them as watching grass grow. For some it was downright torture. Many were victims of the word poverty I described in Part 1.
I moved my word of the week into my inclusion classes.  I sold my ELA co-teachers on it – mostly by promising them that I would do all the work and all they had to do was play along.  For a year I implemented word of the week in two 4th grade ELA classes. On Mondays, I introduced our new word to the classes; I choose them from the novels we were reading (admittedly a complete shot in the dark).  I knew I wanted it to be a challenging word but one that they could actually use at school. I posted the word in the classroom, and we discussed the word ad nauseam.
Here is one of our words of the week- flexible.  I posted just the word with the part of speech and a very kid-friendly definition.
We said it.
We guessed what it meant.
We told what we knew about that word.
We discussed the meaning.
We made sentences with it.
We acted it out.
When possible, we looked at it, listened to it, touched it, smelled it and/or tasted it.
We talked about mental flexibility and physical flexibility
We looked at bunches of pictures that I prepared ahead of time- some that were related to “flexible” as well as some non-examples.
I put them in small groups and had them decide which pictures would be glued to the word of the week- based on whether or not they thought it represented “flexible.”
That particular week I was an overachiever and had cooked frozen French fries the night before. Half of the fries were cooked until hard and crispy while the others were slightly undercooked (soggy fries- my personal favorite). Each student got a fry and got to touch, smell and even taste it if they wished.
They decided if it was flexible (able to bend easily without breaking) or not.
We also watched a video about an little girl who is uber flexible.
I invited students to demonstrate to the class how flexible they were.
The teacher and I demonstrated how inflexible we were.
Finally the class decided who was the most flexible.
We really chewed on the word.
At the end of the lesson, we ended up with this…

and this was how they would record who used the word… 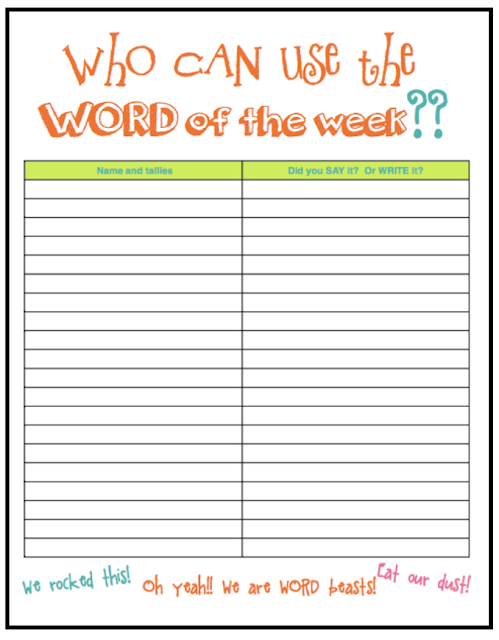 Feel free to download this document HERE.
I explained that the goal was to use it as much as possible (either in discussion or writing) all week long. When they did, they got to write their name on this designated sheet of paper (the teacher had to approve it first). Believe me, most weeks they used it incorrectly much more than they used it correctly.
At the end of the week, the student whose name was written the most times won a prize from my prize box. I know that many educators don’t believe in rewards like this, but I do. I believe in the power of positive reinforcement. Like I mentioned before, trying to use a new word would not be easy nor tempting to my students; they needed a little incentive. I quickly saw that my students with language deficits were not the ones getting their names on the sheet (no surprise there).  To up the ante, I took them aside and asked each child what he or she would like to see in my prize box.  Hot Fries and Dr. Pepper were the most requested so I made a point to have those ready just in case they won the competition. It worked, and more of my students started to win. In fact, they became obsessed with winning! They knew there was good stuff in my stash! If this sounds familiar it’s because this later evolved into Idiom of the Week which used the same premise and I blogged about it HERE.
Remember, I introduced flexible on Monday. The challenge that week was to use it (verbally or in writing) as many times as possible.  Again, I wouldn’t be in class again for a few days so it was up to the teacher to decide when students “got credit” for correct use.
I would go back to class on Thursday to focus on novel study or ELA skill and then pop on on Friday to give the winner their prize.
Sometimes I chose multiple meaning words; tart is one I remember vividly. It was the perfect opportunity for a multi-sensory learning experience.
Looking back, I think the kids could have handled more than one word of the week, but I’m not sure the teachers could have. It did take some policing to monitor who was writing their name down and to keep the cheaters at bay.  All I knew was that I was doing this on a wing and a prayer and it WAS getting kids to use new words and use them often. They were using the words even when I wasn’t there to pester and prod them!
My vocabulary instruction wasn’t perfect, but come to find out, it wasn’t half bad because it was very much in line with Robert Marzano (teacher/genius) and his methods for teaching new words. We all learned about Marzano in college, but it wasn’t until many years after grad school that I went back to look at his teachings and this method in particular… 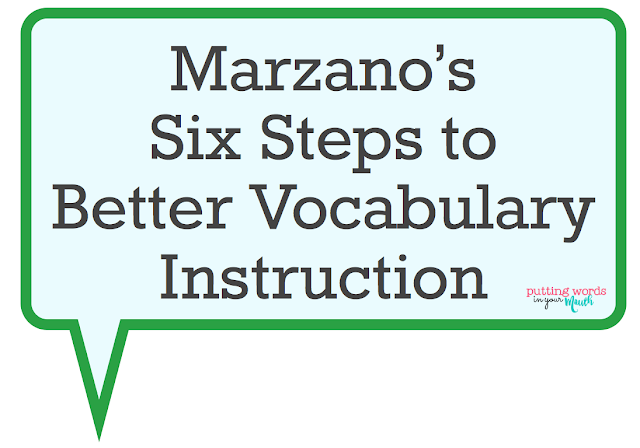 His 6 steps make up a research based strategy for teaching vocabulary (Marzano, 2004). It involves the following:
1.  Provide a description, explanation or example of the new term.
2.  Ask students to restate the description, explanation or example in their own words.
3.  Ask students to construct a picture, pictograph or symbolic representation of the term.
4.  Engage students periodically in activities that help them add to their knowledge of the term in their vocabulary notebooks, such as games that enable them to play with terms.
You’ll find some examples of how to do these steps in the handout at THIS LINK.
Check out this beautiful example of Marzano’s strategies at work in a classroom.  You’ll notice that the teacher has chosen a Tier 2 word…
His students said the word, spoke about the word (both to the teacher and peers), drew a picture and played a game that incorporated movement.  He even included some American Sign Language in the instruction!  He teaches 1-2 words per week and puts them on a word wall. I love that he said they “spent some quality time” with the word.  I just love this video.  I would almost declare this guy an honorary SLP!

In short, if you commit to Marzano’s tried and true strategy, there’s no picking and choosing; it’s important that all parts are carried out. Many of my fellow SLPs in our district are “anti-games.” If you are familiar with me and my products, you’ll know I am PRO-game, and now I feel like I am in good company with Marzano. Games create moments of fun that are somewhat rare in school – now more than ever – and those associations made during games stick with kids. Not to mention it’s instant and natural positive reinforcement for correct answers.
Recently while eating dinner at a local seafood restaurant, a server came to my table and gave me a hug. I had her in therapy from about first through third grade. She was the only student to whom I ever had to teach the /ʒ/sound (among other sounds). She’s a brilliant girl in college now – on her way to be an engineer- and she told me that some of her best childhood memories included playing games with me in therapy. She said it made learning fun and she always asked Santa for the games we played. In fact, she said she still had a few.  Games make an impression- they make a moment and a memory.
Marzano’s 6 Steps to Better Vocabulary Instruction is just one of the strategies I have to share with you for teaching vocabulary.  I’ll pick up next time with 2 more that you can easily add to your language arsenal.
If you haven’t yet grabbed my Tier 2 vocabulary lists, lead back to Part 1 in this series, grab the freebie, and check out all of the lists.
I hope all of you who celebrated Easter had a blessed one 🙂