ShareTweetGooglePinterestMail
With Valentine’s Day approaching, my friends, the Frenzied SLPs, and I thought it was the perfect time to talk about love.
I like to think of myself as professional, but I have a hard time viewing the children I treat as simply my “clients” or “students.”  I get attached, and they usually get attached, too. Whether they’re little angels or little devils I usually ended up sincerely loving them.  Even more so, I LOVE being an SLP,  but over the past 20 years I’ve discovered that sometimes it hurts.  Literally! 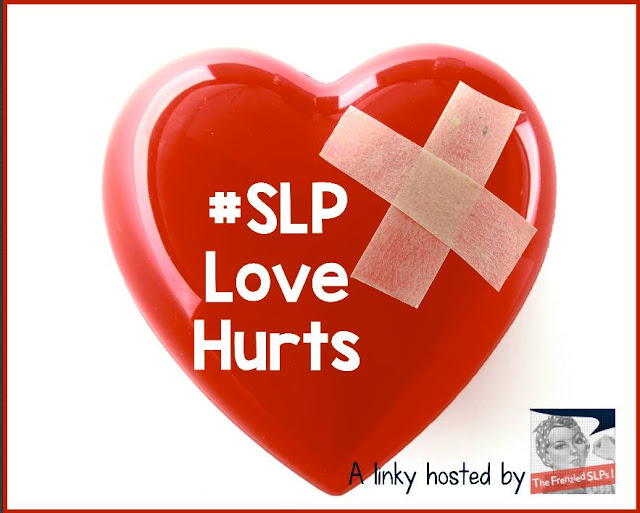 Does this look familiar?…

I’m betting it does.
When working with 3 years olds (and up!) there’s plenty of pouting and crying. I can ignore it for a while.  Everyone is entitled to a little pity party sometimes.  Eventually, I go over and console and coax.
Ahhhh that brings me back to this one time…..
I had been working on articulation and social skills with one little guy who happened to have anxiety and Oppositional Defiant Disorder (ODD) for about two years.  In the beginning, therapy sessions were mostly disastrous and chock full of defiance and aggression.  He regularly trashed my room and lashed out at me. Little Johnny was in a bad place.  School in general was not something he was fond of, and his parents were still trying to find the right medications to treat his conditions.
Over time, with lots of medical attention and behavior modification, he improved. We had finally progressed to the point where he could attend a social skills group with a peer.  There was a time that any compliant behavior at all seemed like pipe dream, but now he was happier and more agreeable. He was even taking turns and accepting disappointment- which had been a long time problem.  I grew to love him.  He still had tough days, but instead of aggression, he just did the little-head-in-the-hands or head-buried-in-the-knees  and then pull himself together.
One day it was taking longer than expected.  He had lost the game had played in our social skills group.  He had said all the right things out loud to himself, “It’s just for fun,” “It doesn’t matter who wins,” and he even told the winner “Good job.”  I was so proud of him, but his fortitude didn’t last long.  After a few grunts and crumbling of paper, he resorted to curling up in himself like a pretzel, and he wasn’t budging. Finally, I walked over and squatted in front of him.  I put my head over his and whispered words of encouragement in his ear.  Then I reminded him that it was almost time for recess, and he would get to play on the swings soon (his favorite).  His speech partner perked up and said, “Uh-uh, he moved his clip too far down so he can’t go out today.”
Gee, thanks.
As soon as he said it, Little Johnny whipped his head up, knocking me squarely in the mouth (my money maker!) and tossing me firmly off my squat and onto my butt. I instantly tasted the blood and realized my lip was busted – not to mention I was seeing stars.  Oh, and my pride/dignity was pretty banged up, too.

He was immediately filled with remorse, apologizing and crying. We both took some time to lick our wounds, and then the day resumed- along with some Motrin and ice on my lip. I learned a valuable less that day-  not to put my head (or any other part) next to a pouting munchkin!! They’re unpredictable no matter how well I think I know them! I also squat next to kids much less often!
Since then, I’ve learned other valuable lessons like:
But seriously, handling escalated behavior really is all about focusing on safety.  During my 7 years as “lead teacher” at my school (in addition to SLP), I intervened in behavior situations every week.  Now I am the CPI trainer for my district.  It’s so easy for someone to get injured.  Even at a primary school, kids are little but unruly and surprisingly strong!  I, myself, have been to urgent care after intervening with a violent child.  Sometimes it’s better just to keep a child safe and supervised (in an area free of dangers) and let him release and let off steam than it is to intervene.
Keeping everyone safe is always the goal.
An InLinkz Link-up